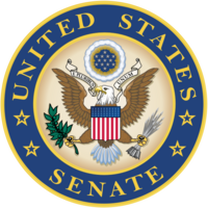 The Animas High School Model Senate of 2016 was a project that the seniors did this year where each student took up a role of someone in the senate.  Most represented senators, some lobbyists, experts, majority and minority leaders, and even POTUS (President of the United States).  We participated in a senate and each crafted speeches to give.  In the senate we voted on three different bills created by students.  Each student paired to make their own legislation and prior to making legislation did research on the three committee topics; Immigration, College Debt, and Climate Change.  For this project I chose to go across the aile and became senator, and former candidate for Vice President, Tim Kaine.  I worked with another student to create legislation that eventually was declined to bring into senate to vote on.  I also did research on all three topics.  To prepare for the Senate I also crafted a speech that I gave in front of all the senators.  In the Senate I participated by voting based on my senators views and the pressure of my party platform.

The first goal that I made for myself is to improve the transition from sentence to sentence.  I usually find that I struggle making my sentences transition when starting a new writing.  An example from my college essay is in the sentence “She has gone there before and learned a lot.  I am excited to be in Durango as an individual attending Fort Lewis College...”  In this sentence the transition between these two sentences is minimal.  A way I can work on this is just by getting the support from my peers and spending time practicing writing.

The second goal that I set for myself is to develop better sentences.  To make each sentence show what I am thinking that moment and not to just tell the reader.  An example of where I do that well is in my college essay, “The sky gray, but still filled with light, dropping snowflakes softly onto the ground.  The pine trees are motionless.”  Before this sentence my introduction was boring and bleak.  In this sentence I paint my memories in words, describing how the reader should feel just using some fancy words.

Finally, the next goal I want to work towards is organization.  Sure, this could be making sure everything flows well but it is also about making sure the writing doesn’t jump from one subject to another chaotically.  An example of how I do try to do this in my college essay is the sentence, “Every recess a bunch of the students would go out to hit targets.  To this day I like to throw my atlatl at home… Even though a big part of Durango is the outdoors I still find that I want to stay not only for that but because this is where I was raised.”  In this transition I mostly do well at changing what I am talking about, from the outdoors to nostalgia, but I still feel like I have some room for improvement.

Through the process of writing my college essay I further developed the skill of showing and not telling.  This is the skill of writing descriptive sentences by almost telling a story.  When I first started my essay the first sentence was “My name is Skylar Schultheis…”  This would not work for many reasons so instead I was given advice to write a short story for the introduction because the one I had was extremely bleak, and I agreed.  Eventually I came up with the much more descriptive introduction of a memory I have of when I was young.  The story started out as such, “The sky gray, but still filled with light, dropping snowflakes softly onto the ground.  The pine trees are motionless.”  In order to make my writing more interesting I thought of a story that incorporated my topics and tried to show my story and not just to tell it.